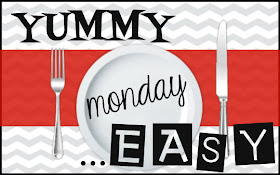 I've never been there.  Have you?  I've never had a Philly cheesesteak, either.  Am I missing out?  They look delicious, it just seems like one of those things you can't do justice to unless you're a street vendor in Philly, you know?  Kind of like, it would seem wrong to make your own Chicago Dog or Memphis BBQ.  Right?

Well, anyway, I saw a pin on pinterest for Philly Cheesesteak Stuffed Peppers.  And I love peppers.  (The bell kind, anyway).  BUT, when I followed the link I'd pinned, it led me to a photo collage and a generic description like "use thin deli roast beef, salt and pepper to make this easy stuffed peppers" or some such nonsense that doesn't constitute a real recipe.  Don't you hate that?  So I used my powers of observation, the photo collage and my prowess in the kitchen (ha!) to create for you: 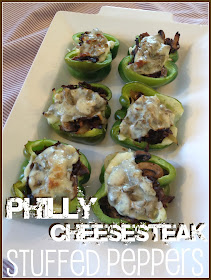 And then after I did that, for the heck of it, I googled "Philly Cheesesteak Stuffed Peppers" and came up with about 6,592,031 different recipes.  So, if this doesn't seem authentic enough or something, you can always feel free to do that... 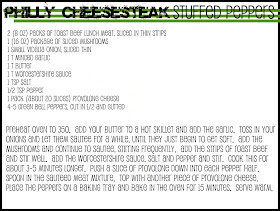 And on to our review of said recipe.  Seriously?  It was so good!  I was impressed with myself - but then realized it was more the general idea that was impressive, and that I can NOT take credit for.  Everyone agreed the innards (aka the stuff I sautéed) was super delish.  Even bug liked the it - though he apparently HATES peppers.  My mom said they were the best stuffed peppers she'd had and we all agreed that they were better than the tomato-based ground beef/rice/whatever versions that are pretty standard. 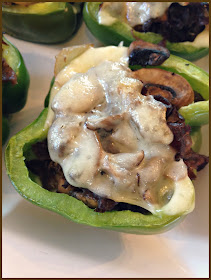 Our peppers were not very peppery tasting, but I attribute that to cheap peppers at a big chain store.  If you grow your own or get them at a farmer's market or something I bet the flavor would be CRAZY GOOD. 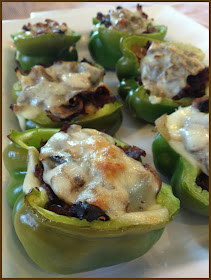 So, in short, make these.  Yep.  Not a fail.  And you won't feel like a poser because they aren't REALLY a Philly cheesesteak.  Phew.

*Be sure to check the right sidebar for all the fun parties I link to!
Unknown at 6:00 PM
Share

bug, mini, pip mr and I love to hear from you. Like LOVE, love.